Mr. IHARA Yasuhiro, the Chief Manager for Nagoya Regional Office of Kyodo News, visited the Global Media Research Center of GSI-NU to speak to a large audience consisting of members of GSI/SI-NU and the public on July 14, 2017. 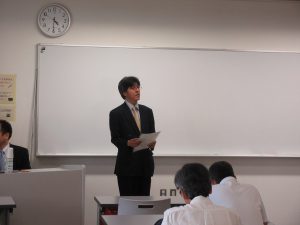 In this lecture, Mr. IHARA spoke about the post-war history of Kyodo-News and how Kyodo played an important role as the leading news agency in post-war Japan to students, researchers and citizens.
Mr. IHARA also emphasized that times will change, but the mission of news organizations remains the same even if the methods of the news gathering and communication have changed due to the spread of mobile devices and the internet.

After the lecture, Mr. IHARA then answered questions from the audience about his talk and the future visions for mass media in Japan. 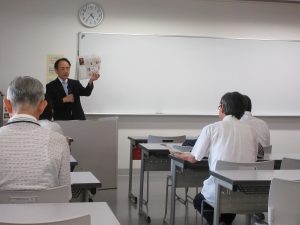 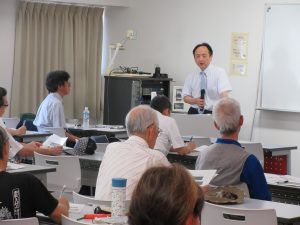 *Kyodo News
The Kyodo News founded in November 1945 as a nonprofit cooperative organization, is the leading news agency in Japan. Kyodo covers accurately and promptly the ever-changing developments in Japan and the rest of the world, distributing news around the clock to domestic and overseas news media as well as international organizations and institutions. Most Japanese newspapers and broadcasting stations subscribe to Kyodo News.
http://www.kyodonews.jp/english/

*Global Media Research Center (GMRC, GSI-NU)
GMRC was launched in April 1, 2015 at Nagoya University.
GMRC aims to provide a major platform for media and communication studies and to undertake interdisciplinary research aimed at exploring global communication with an emphasis on international images.
http://global.si.i.nagoya-u.ac.jp/en/index.html